ABOUT US - Board of Directors 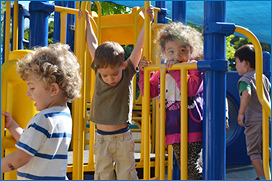 Ronda Chu is an Airport Economic Planner for San Francisco International Airport.  Prior to joining the Airport Commission, she worked as a management consultant with Booz Allen Hamilton and Jacobs Consultancy in their aviation practice. Ronda holds a B.A. in Economics from the University of California, Berkeley, and a M.S. in Financial Economics from the University of London.

Melinda Day is faculty and Department Coordinator in the Education & Human Development Department at Canada College.  She has more than 18 years of experience working with children, families and early educators.  Her experience in the field ranges from preschool teaching in Head Start programs and laboratory schools on the East Coast to consultant on curriculum and management to early childhood organizations.  Dr. Day co-created the Promoting Achievement Through Higher Education (PATH) program at San Francisco State University.  PATH’s goal is to raise the qualifications and degree attainment of early educators by removing some of the barriers facing the workforce.  Melinda received her B.A. in Child Development from Tufts University and her M.A. in Public Health with a concentration in Maternal and Child Health from the University of Illinois-Chicago.   She completed her Ph.d. in Child and Family Studies at Syracuse University.  Melinda joined the Palcare Board of Directors in 2016.

John Delaney is the Palcare Board past President and current Treasurer. He is Senior Vice President and Manager of the Burlingame Office of Boston Private Bank & Trust Company. Mr. Delaney is responsible for the overall management of the office, business development and community relations. Prior to joining Boston Private, he worked for Wells Fargo Bank for 8 years in the Consumer Credit Group as a Market Development Manager and also held positions in Strategic Marketing.  John also held various management positions at Citibank for 17 years including Branch Management, Financial Analysis, Community Marketing and Customer Service.  He holds a B.S. degree in Business Administration and Economics from St. Mary’s College of California. He has also acquired Series 7 and 63 Investment Licenses as well as completed advanced Marketing courses from the University of Chicago. John is a member of the Burlingame Rotary Club.  He is married with two daughters.

Jamie Hui joined the Palcare Board of Directors in 2016. After completing her undergraduate degree she was not sure what she wanted to do, but knew she wanted to work with children in some capacity. Jamie became a student teacher at a local community college child development center, where she worked her way up to teacher. Realizing she wanted to do more in the field, she earned her M.A. in Early Childhood Education. She went on to do non-profit and public work in the Bay Area. Jamie is on staff at Cañada College in the Education & Human Development Department, and is also a part-time instructor.  She is excited to go to college every day and work with students who will become the next generation of educators.

Scott Johnson is the Deputy Director of Human Resources for San Mateo County.  He has been with the County for the past ten years.  Before joining San Mateo County, he worked in the commercial insurance business and is a Chartered Property and Casualty Underwriter (CPCU).  He graduated from Baylor University with a B.S. in Business Administration in Finance, Accounting and Economics.  Scott is married and resides in San Francisco with his wife Diane, who is a Speech Pathologist for the San Mateo Office of Education.

Greg Land joined the Palcare Board in 2018 but was also on our board from 2006-2008.  He has also been on the San Mateo Union High School District Board since December 2015 and before his service on the SMUHSD Board he served on the Burlingame Elementary School Board. He has been an educator for all of his professional life, as a Teacher, Assistant Principal and currently the Principal, Santa Rita School, Los Altos. Greg grew up in Southern California and graduated from the University of California, Los Angeles. He and his family reside in Burlingame. His daughter Alex is a graduate of Palcare and is now in college!

Mary Murphy joined the Palcare Board in 2016. She earned a teaching degree from the University of London, England and taught at Winston Churchill Secondary School. She moved to the Bay Area soon after and became a real estate professional assisting sellers and buyers of residential property in San Mateo County. Her commitment to the real estate community includes teaching and sharing best practices with other Realtors. Mary is a long time member of the San Mateo Association of Realtors where she Chair the Technology Committee. She is also a member of California Association of Realtors, National Association of Realtors, and a member of the Top Agent Network. Mary is a past President of the Burlingame Rotary Club and currently serves on its Board of Directors as Executive Secretary. Her interest in early childhood education stems from her teaching background, and she is passionate about quality child care.

William Pitney joined the Palcare Board in 2009 and is now serving as President. He also participates on the Finance Committee. William founded the financial planning and advisory firm William Pitney Advisory Services in 2003. From day one, he has been an advocate of the consultative approach to planning.  His previous work experience includes three years at Agilent Technologies as a Market Research and Business Intelligence Manager. He also worked four years at Hewlett Packard, holding various finance positions including Senior Financial Analyst, and Business Consultation and Transition Project Manager.  William earned a B.A. in Sociology from the University of Kentucky and an M.B.A. in Entrepreneurship and Marketing from the University of Arizona. He has earned his Series 7 and 66 Investment Licenses, California Life Insurance License as well as the prestigious CFP®, AIF®, and RFC® professional designations.

William relocated from Santa Rosa to Foster City with his wife Denise and their son. In his free time, he enjoys watching spectator sports and volunteering to organizations focused on children and families. He has served as Treasurer for organizations including Live Oak Preschool in Healdsburg, Restorative Resources in Sebastopol, and the Adult Literacy League of Sonoma County.

Steven Ross is a Senior Director, Human Resources at Gilead Scientific in Foster City.  He joined Gilead in July 2018, with previous HR roles at Visa, Cengage Learning and Thermo Fisher Scientific.  Steven graduated from George Mason University in Fairfax, Virginia with a B.A. in English.  He and his two children (both Palcare alums) live in Burlingame with their standard poodle, Watson.

Henry Yeung is a Senior Project Manager at Sutter Bay Medical Foundation, an organization that works tirelessly to deliver top-rated, affordable health care.  He works directly with the CEO and COO on implementing operation and strategic initiatives.  Henry has been with the company since 2012 in various roles.  He graduated with honors and has a M.S. in Health Care Administration.  Henry joined the Palcare Board in 2016 and has a son who attends the program.